With Gas Prices Low, Congress Has Opportunity to #FixTheTrustFund

Last month’s average gas price in the U.S. was the lowest for July since 2004. Cheap gas coupled with an improved economy is spurring Americans to drive more. After a decrease during the recession, vehicle miles traveled (VMT) is climbing again. Summer is the busiest time on U.S. roads and many drivers will find themselves stuck in traffic, whether they’re headed to work or the beach. In 2014, Americans spent 6.9 billion hours sitting in traffic (42 hours per driver). The wasted time and gas add up—the total cost of congestion in 2014 was $160 billion ($960 per driver). 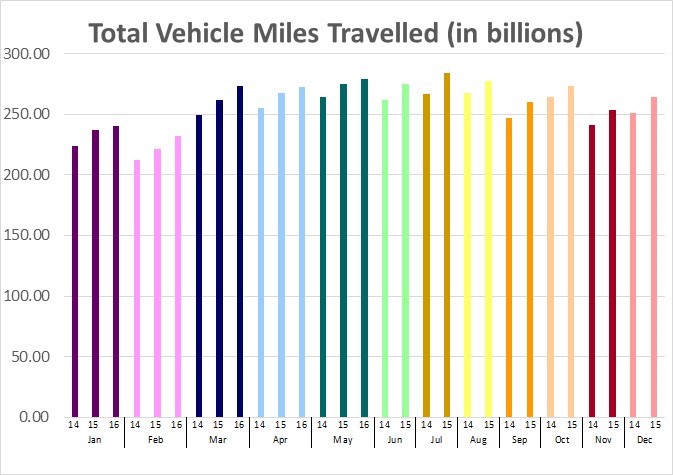 A major contributor to congestion is the underinvestment into our road network. According to AASHTO, there is a $629 billion backlog of highway needs. For the federal government and most states, taxes on gasoline and diesel are the primary funding source for highways, but the tax rates frequently have not been raised in years, sometimes decades. Many states are considering plans to raise their fuel taxes to increase their investment in highway infrastructure and last year nine states actually did it. Despite these tax increases, the price drivers pay at the pump has continued to go down—one study by ARTBA even shows that a gas tax increase does not have a direct impact on the price at the pump.

Federal lawmakers unfortunately have not followed their lead. The federal Highway Trust Fund has been flirting with insolvency since 2008 because its primary funding source, an 18.4 cent per gallon tax on gasoline and a 24.4 cent per gallon tax on diesel, has not been raised since 1993. Inflation has cut its real value by 40%. The fund has been propped up by $140 billion in transfers from the general fund. In order to ensure adequate and stable funding for America’s highways, the Trust Fund needs a sustainable funding source. The most direct and immediate way to #FixTheTrustFund is to increase the tax on gas and diesel a sufficient amount at the federal level to stop the need for general fund transfers and allow for increased investment to address the backlog.  Meanwhile, there should be additional pilot programs to test charging motorists based on how much they use roads with the long-term goal of using mileage-based user fees to fund the federal highway trust fund to prepare for the future. It’s time for Congress to step up and #FixTheTrustFund.