December 19, 2014 By: America's Infrastructure Report Card
Back to News 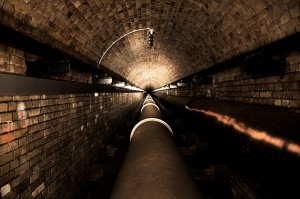 As the weather changes and our infrastructure continues to be neglected, issues and disruptions are increasing. Infrastructure collapses, like the water main break in DC, remind us that failing infrastructure is fragile and unpredictable—and should be continuously maintained to help prevent a crisis.

On Tuesday in Washington, D.C., a 12-inch water main ruptured below ground, flooding three subway lines and damaging the streets above it. According to DC Water, the pipe was 61 years old, a relatively young pipe among a system with a median age of 79 years. Some pipes in the system even date back to the Civil War era.

DC’s drinking water infrastructure requires $1.6 billion in upgrades over the next 20 years and the sewer system needs $2.5 billion in fixes.  There are 240,000 water main breaks per year and one every two minutes in the United States because of aging pipes. The DC water main break, which affected both the metro rails and streets above, shows the domino effect of one piece of infrastructure’s impact on others.

DC is not the only place where aging infrastructure has shouted for investments. This week, the Nevada Section of ASCE released its state Report Card, where the overall grade was a C-. The report points to the state’s great transportation and infrastructure needs to be discussed in next year’s legislation session. In an op-ed piece from Vermont, the author called for stronger dam legislation, citing the Report Card for Vermont’s Infrastructure’s data.

Due to increasing visible need for infrastructure repair, more and more states are taking action to fund infrastructure projects through various measures. In Washington, Gov. Jay Inslee unveiled a 12-year, $12 billion transportation proposal, which would be paid for with fees and a new carbon pollution charge. States like Michigan, Tennessee  and North Carolina are also pushing for transportation funding at the state level.

Though action on the state level to increase infrastructure funds is encouraging, the best thing for our nation and our economy is to fix the Highway Trust Fund and increase the national gas tax to match inflation.