This Week in Infrastructure: Federal Funding Proposals Outline Roadmap for the Future

February 06, 2015 By: America's Infrastructure Report Card
Back to News 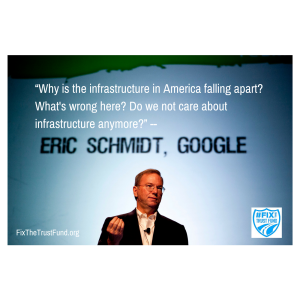 A conversation between Foxx and Schmidt during Foxx’s Google chat

Between the USDOT’s 30-year transportation funding plan, Obama’s 2016 budget featuring the GROW AMERICA act and testimonies of transit needs in the media, our nation’s beleaguered infrastructure is getting some much-needed attention.

One blaring example of the our nation’s urban transit needs is evident in James Robertson’s now viral story of walking 21 miles as part of his commute to and from work in Metro Detroit due to lack of transit. While this is an extreme case, Metro Detroit’s transit options have become fewer over the last five years. The Detroit Free Press reported that tens of thousands of Detroit residents have limited or zero access to public transit that meets their core needs, echoing the Report Card’s assessment that 45 percent of households don’t have access to transit. According to the Detroit Free Press, the cascading effect of transit needs is critical as, “cities live and die on their ability to move their citizens around.”

In May, Director of Michigan DOT, Kirk Steudle, has the opportunity to begin addressing this need along with the state of the roads by passing Proposition 1 which will remove the sales tax from gas and allow the fuel tax to be raised, in order to provide for transit needs and “stop the decline” of Michigan’s roads.

Infrastructure is a problem across the nation. America’s roads are now ranked no. 16 in the world, behind countries such as Oman, the United Arab Emirates and Portugal. The USDOT’s 30 Year Transportation Plan Blue Paper compares our nation’s infrastructure quality, broken down by sector, with that of the world’s. It also projects how failing to invest in our infrastructure, as the country’s population continues to increase, will affect the daily lives of every American.  It is startling to think that by 2045 traffic conditions like that in Los Angeles could be the reality of every city.

It is clear that transportation issues, whether traffic gridlock, transit shortages or bridge closures, are a direct result of lack of maintenance and funding. Obama’s GROW AMERICA Act, and a $478 billion, six-year surface transportation (MAP-21) re-authorization proposal, are encouraging steps to address this but does not provide the long-term, sustainable funding that our surface transportation system requires.

Prev Story: ASCE Endorses an UPDATE to the Gas Tax Next Story: Chime in on Wednesday to Fix the Trust Fund