Texas Civil Engineers Give the State’s Infrastructure a “C” Grade

On Wednesday, the Texas Section of the American Society of Civil Engineers (ASCE) released preliminary findings – including grades – from its 2021 Texas Infrastructure Report Card, the Section’s first report card since 2017. Texas civil engineers gave 12 categories of infrastructure an overall grade of “C”, an upgrade from its 2017 grade of “C-.” Graded categories included aviation (C), bridges (B+), canals (D+), dams (C+), drinking water (B-), hazardous waste (C+), levees (D-), roads (B+), solid waste (B-), stormwater (C+), transit (B+) and wastewater (C). The full report will be released in late February 2021.

Energy infrastructure received the highest grade of a ‘B+,’ with advancements in wind, oil and gas infrastructure helping maintain the state’s stellar reputation as a leading energy producer and provider. There were several notable successes among the transportation sector as well. The Lone Star State has accommodated significant population growth through meaningful attention to its aviation (B-), bridges (B-) and transit (B-) sectors. Texas is a critical aviation hub for the nation’s domestic and international passenger travel and air freight—boarding 90 million passengers and moving 5.8 million tons of cargo in 2019 alone. Providing 1.1 million jobs and contributing $41.8 billion to local payrolls, the aviation industry delivers an overall economic impact of $130 billion to the state’s economy.

On the ground, Texas maintains the largest bridge inventory in the nation at nearly 57,000 bridge structures with an astounding 737 million vehicle crossings a day. Despite significant usage, Texas’ network boasts the smallest percentage (1.3%) of structurally deficient bridges in the nation. In 2018, TxDOT classified 82% of bridges as “good” condition or better, and zero crashes occurred due to poor bridge conditions.

While transportation has been heavily prioritized, less attention has been directed towards the state’s wastewater (D) systems and levees (D), which 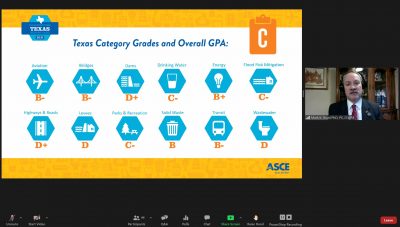 received the lowest grades in the report. Texas wastewater infrastructure is facing a funding shortfall of more than $200 million, and the number of sanitary sewer overflows has more than doubled in the last 4 years. Levees and dams are each hindered by a lack of condition data and insufficient resources to ensure these structures are able to protect local communities and residents. More than 1 million Texans and $127 billion dollars’ worth of property are protected by systems of levees, but more than 75% of Texas levee systems have not received a screened risk classification, leaving their condition largely unknown and posing a risk to local communities.

The report also includes calls to action to raise the grades, such as:

“The ASCE Texas Infrastructure Report Card is a critical tool as we assess our needs and measure progress in actively building Texas into a better place to live, work, and raise a family,” said Representative Dennis Paul, P.E. “We must continue to work together with all levels of government, community leaders, industry partners, and universities, using this invaluable resource to help keep us better informed about the issues facing Texas.”