November 17, 2015 By: America's Infrastructure Report Card
Back to News 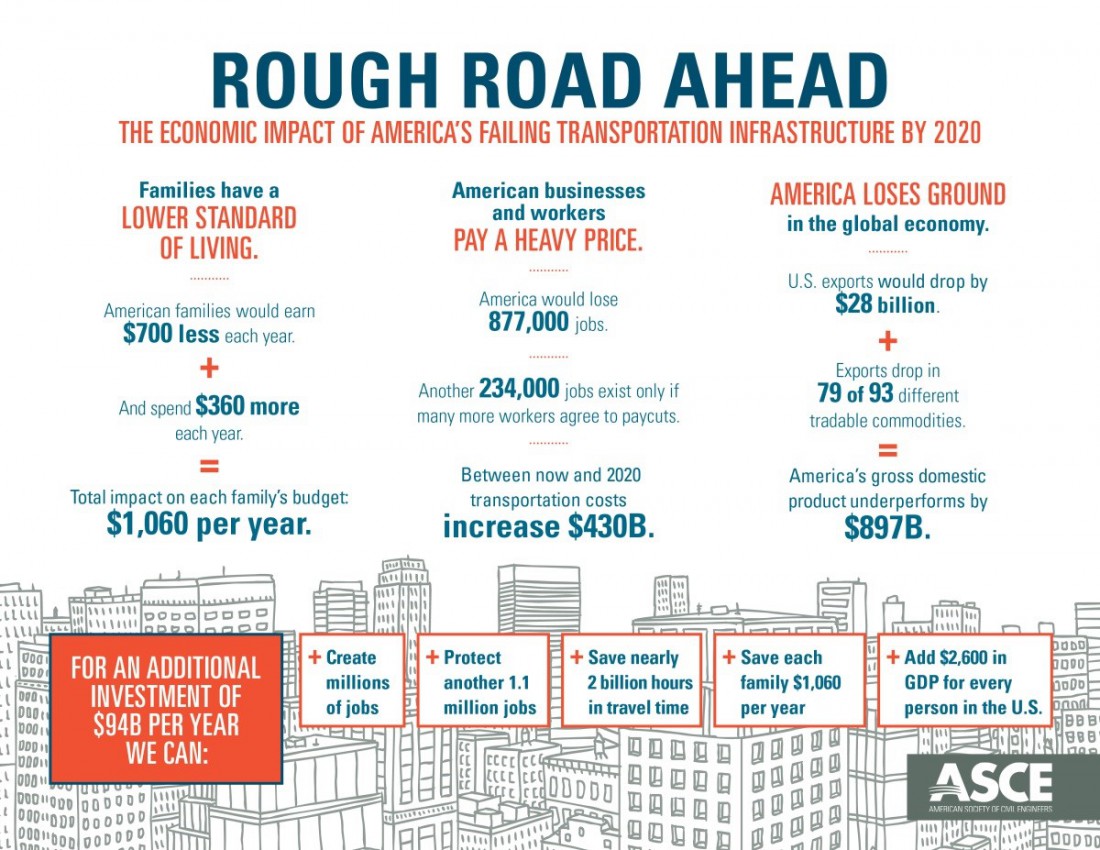 The House and Senate are currently meeting to decide a big question when it comes to the future of the nation’s surface transportation program: Should funding levels be increased in order to improve and modernize the nation’s roads, bridges and transit system, or should funding levels stay flat for the next six years while the conditions of our aging infrastructure only further deteriorate? ASCE’s answer is pretty clear in a letter we sent to Capitol Hill today: Congress has the means and capability to increase funding levels and they should not squander this opportunity.

While we disagree with his hesitancy to hold a vote in the House on increasing the federal motor fuels tax – the correct way to fund the current highway and transit bill – credit goes to House Speaker Paul Ryan (R-WI) for working to include a provision in the House bill that provides an additional $40 billion to the program. ASCE, along with other groups like the U.S. Chamber of Commerce, believes that the additional money should go towards crafting a five-year program that includes significant funding increases, rather than a six-year bill that only maintains the status quo.

• Is what results in our nation’s roads and transit systems receiving a “D” grade and our bridges receiving a “C+”;
• Costs the average American family $1,060 per year each year until at least 2020 due to inadequate roads, bridges and transit systems; and
• Will cost the American economy more than 876,000 jobs, and suppress the growth of the country’s Gross Domestic Product (GDP) by $897 billion in 2020.

Funding increases would allow the House and Senate to produce a bill that would:

• Maintain a strong TIFIA program that can help leverage billions of dollars in private sector capital for investment in our nation’s infrastructure;
• Create a dedicated freight program to help ensure federal investments are targeted at improving U.S. economic competitiveness;
• Improve innovation, which is vital to extending the life cycle of infrastructure assets and making our transportation infrastructure more efficient; and
• Deliver some of the major infrastructure projects that have currently been sitting on the sidelines due to a lack of funding.

The time is now to send a message to Congress regarding the need for increased investment. Call your House member and Senators, and use the hashtag #FixTheTrustFund on social media to urge them to increase funding for transportation in the coming days.