So often, our water infrastructure goes unnoticed until a pipe bursts. Lately, there have been several events drawing attention to the water sector’s significance, including the water main break at UCLA, algae in Toledo drinking water, and drought in California.

Water infrastructure deserves our attention and investment for many reasons, beyond the most recent media attention. This week, ASCE co-hosted Water Works!, a day of events highlighting the economic value in the water sector. The legislative day in Washington, D.C. included the release of a report, which emphasizes the economic impact of water, wastewater and storm water utilities. 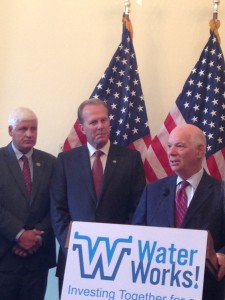 Rep. Bob Gibbs, Mayor Kevin Faulconer, and Sen. Ben Cardin sharing their thoughts on the importance of water infrastructure for our economy.

The report, National Economic & Labor Impacts of the Water Utility Sector, reveals the sector supports $524 billion in economic activity. Furthermore, in the next decade the utilities will include 289,000 jobs.

Congressional leaders and public officials shared their thoughts on the importance of investment in infrastructure during a press briefing, which emphasized the bipartisan agreement of water infrastructure investment.

“Water infrastructure is a priority we cannot allow to remain unaddressed,” remarked Rep. Tim Bishop, Ranking Member on the Subcommittee on Water Resources and the Environment, as a call to action to “build on the accomplishments of WRRDA.”

The importance of the water sector was underscored in Sen. Ben Cardin’s comments, as he pointed to the sector’s role in public safety and job growth.

Rep. Bob Gibbs, Chair of the Subcommittee on Water Resources and the Environment echoed those sentiments, and noted that the aging infrastructure is costing us millions of dollars as valuable water is being lost each day through leaky pipes and breaks.

As Mayor Kevin Faulconer of San Diego said at the event, “There is no better time to invest.”