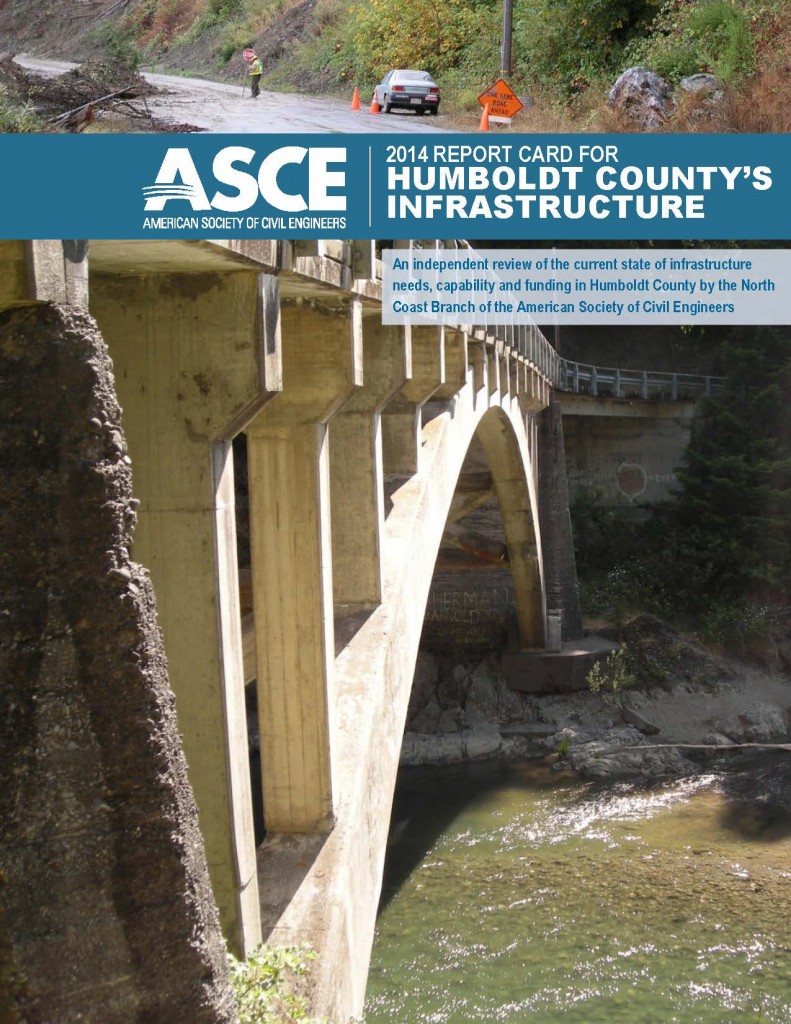 This afternoon the 2014 Report Card for Humboldt County’s Infrastructure, an independent review of the area’s transportation needs, was released by the North Coast Branch of the American Society of Civil Engineers. The Report Card gave the County’s roads a grade of D+ grade and bridges received a grade of C-.

“The grades are disappointing, but not surprising to Humboldt County’s citizens who drive these roads and bridges,” said Yoash Tilles, president, ASCE North Coast Branch. “This impacts our community’s economy, safety and daily life. It is time to make the investment to improve our transportation infrastructure.”

Among the key findings of the report:

“The Report Card for Humboldt County’s locally owned transportation infrastructure gives us a benchmark for where we are at, and a path forward for where we need to go,” said Tom Mattson, director, Humboldt County Public Works. “The County is dedicated to continually improving the quality of life for residents and strengthening the local economy.”

“Transportation infrastructure is crucial, as it is a lifeline to the rest of the state during a disaster,” said R.C. Doby Class, director, City of Arcata Public Works. “Isolation of the county makes resiliency and redundancy essential components for residents’ safety.”

“The tribes who live in Humboldt County depend on quality transportation infrastructure,” said Sandi Tripp, director, Karuk Tribe Department of Transportation. “The average grades demonstrate more must be done to keep our community safe and thriving.”

A team of 37 volunteers, including civil engineers, representatives from the Karuk, Hoopa, Yurok tribes, Bear River Band of Rohnerville Rancheria, and public and private transportation experts from the City of Arcata, City of Fortuna, City of Arcata, City of Blue Lake, City of Trinidad, and the County, and Humboldt State University Environmental Resources Engineering students analyzed public records over the past year to complete the Report Card. The ASCE North Coast Branch intends to release reports grading additional infrastructure sectors in the future.

Get the 2014 ASCE Report Card for Humboldt County’s Infrastructure here.

Prev Story: Summer Travel Boom as Americans Hit the Road Next Story: ASCE Submits Comments to US EPA on the Use of QBS to SRF Programs