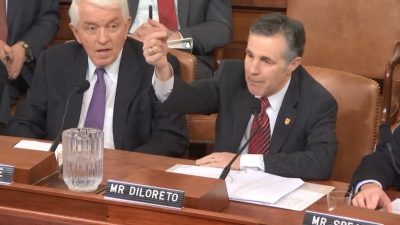 At the four-hour hearing entitled, “Our Nation’s Crumbling Infrastructure and The Need for Immediate Action,”  Chairman Richard Neal (D-MA1) took the opportunity to open the hearing by discussing the state of our nation’s infrastructure and the immediate steps that need to be taken to improve its condition:

“Our infrastructure system used to be the envy of the world. Now, due to decades of underfunding and neglect, it’s falling apart, and we’re falling behind our global competitors.  The deficiencies of our roads, bridges, transit, water systems, and electrical grids are well-documented and widely known. This is a problematic reality for every single state and congressional district in the nation. In fact, the American Society of Civil Engineers gave our country’s infrastructure system a grade of “D+.”  The ASCE also estimates that it would take 2 trillion dollars of investment over ten years just to bring our grade up to a “B.” We face the largest infrastructure funding gap in the world.”

In his testimony, Mr. DiLoreto highlighted the findings of ASCE’s 2017 Infrastructure Report Card, Failure to Act: Closing the Infrastructure Investment Gap for America’s Economic Future, and the need to fix the Highway Trust Fund (HTF),  and support key financing tools such as tax-exempt municipal bonds. Along with Chamber of Commerce head Tom Donohue, DiLoreto advocated for a gas tax increase of 5 cents per year over 5 years, holding up a nickel to show how such a small investment would have such a large impact. With each American family losing an average of $3,400 in disposable income each year – more than $9 a day – due to poor infrastructure, he reminded the Committee that “We are already paying a price for unreliable, outdated infrastructure and getting nothing for it.”

This week’s hearing continued the legislative push on Capitol Hill aimed at developing and passing robust and broad infrastructure legislation. This discussion allowed lawmakers in charge of developing funding and financing options to hear not only the condition of our nation’s infrastructure, but solutions on how to pay for it. The discussion also emphasized the need to ensure how this vital component will make our nation competitive in a 21st century marketplace.

ASCE is staying actively engaged as this legislative push continues on Capitol Hill. ASCE urges all infrastructure stakeholders to reach out to your Members of Congress and tell them to put forward a long-term plan to improve our infrastructure systems.