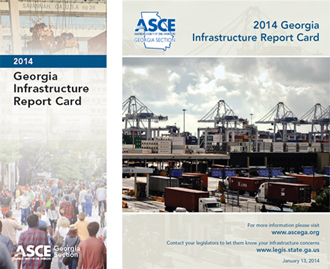 Georgia’s infrastructure has failed to improve over the last five years. In a new report, titled the 2014 Report Card for Georgia’s Infrastructure, the Georgia Section of the American Society of Civil Engineers (ASCE) awarded the state’s infrastructure a “C,” a grade unchanged from their 2009 Report Card. The lowest grade awarded was a “D-”, which went to the state’s dams and transit systems. The Report Card’s highest grade, a “B,” was given to Georgia’s energy and rail systems. Georgia’s growing population combined with cutbacks in infrastructure funding resulted in many of the low grades.

Specifically, the Report Card finds that Georgia is lagging in sustainable investment, including:

“From the Atlanta airport to the Port of Savannah, Georgia is a major player in the global economy” said Kat Gurd, President of the ASCE Georgia Section. “This Report Card shows that our connections to that economy are ailing, hurt too often by underfunding and increasing congestion. If we want to be the gateway to Southeastern commerce, we must deepen the Port of Savannah, increase our transportation funding, and modernize our infrastructure. ”

“One only needs to look at the Kia manufacturing plant in West Point to see how infrastructure can make a huge impact,” said Dan Agramonte, PE, Co-Chairman of the Infrastructure Report Card Committee. “Kia moved to Georgia to take advantage of the I-85 corridor. The new plant brought thousands of jobs to Georgia, and resulted in much, new business and auto suppliers moving to Georgia to leverage Kia’s new location. These businesses—and hundreds like them—are in Georgia because of our infrastructure, and now is the time to invest to make sure they stay and help us attract more like them.”

The Georgia Report Card was created as a public service to the citizens and politicians of the state to inform them on the infrastructure needs in their community. By using school report card letter grades, civil engineers have used their expertise to condense complicated data into easy to understand analysis.

State level report cards are modeled after the national 2013 Report Card for America’s Infrastructure, which gave America’s infrastructure a grade of D+.

To view the full version of the 2014 Report Card for Georgia’s Infrastructure please visit www.ascega.org. 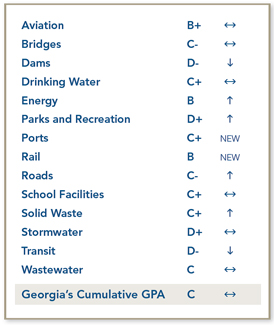 Prev Story: Georgia's Infrastructure Is On Our Mind Next Story: Statement on President Obama’s State of the Union from the American Society of Civil Engineers