Louisville’s Combined Sewer Overflow (CSO) was not meeting standards set in the Clean Water Act, as storms would frequently lead to sewage discharging in local inland waterways. To mitigate the problem, the Louisville/Jefferson Country Metropolitan Sewer District embarked on the $78 million Southwestern Parkway Combined Sewer Overflow Basin project, which uses “capture and release” technology to store CSOs during storms before gradually releasing them into treatment facilities as capacity became available. Due to its location at Shawnee Park in Louisville’s Olmsted Park System, listed on the National Register of Historic Places, the design team constructed the project underneath the park’s Great Lawn to keep out of sight from the public and preserve the park’s essence. The project also incorporated features for the community to enjoy, such as the restoration of a historic structure for youth learning, new basketball courts, and landscaping enhancements. Using the progressive design-build delivery process, the project incorporated stakeholders throughout the process and also boosted the local economy, with a workforce comprised of 76% local labor. 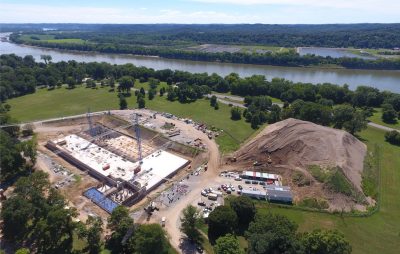