Last week, ASCE hosted state legislators from nine states at the Washington office as part of a Council of State Governments (CSG) Transportation Policy Academy. ASCE has been a regular sponsor of these forums that bring state legislative leaders together to discuss transportation issues and the challenges they are facing in their respective states. In addition to a presentation on the 2013 Report Card for America’s Infrastructure, the event also featured a luncheon presentation on plans for an IMAX movie Dream Big!, which ASCE and the ASCE Foundation are pursuing to put engineering dramatically in the public eye. Lawmakers from Georgia, Hawaii, Kentucky, Nebraska, New Hampshire, North Carolina, South Dakota, Vermont and Washington were in attendance. 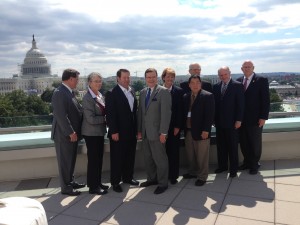 Over the past couple years, state legislators and Governors have taken the lead on addressing the need for transportation financing with several states passing major initiatives since 2012.