Alabama’s Infrastructure Grades Are In 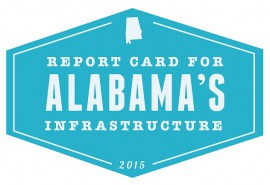 The inaugural Report Card for Alabama’s Infrastructure, released today, reveals that Alabama’s aging infrastructure needs attention, especially its dams. As the only state without a dam safety program, Alabama does not have a complete inventory of all the dams in the state. Without this, Alabama is unaware of its dam safety risk. At the last survey in the 1980s, 147 high hazard dams were found and do not have Emergency Action Plans. Because of the unknowns surrounding Alabama’s dams, the Report Card graded it an “Incomplete,” signified by a question mark to demonstrate the uncertainty caused by of a lack of inventory and dam safety program.

With a cumulative grade point average of “C-,”Alabama’s infrastructure is only as strong as its weakest link. All of the highest grades are linked to the lowest grades in the report, as infrastructure works as a system. Plans and funding to address the state’s aging infrastructure assets fall significantly short of needs. Of note:


Released in Birmingham, the Report Card also highlights ways to improve the grades, including:


View the full report to learn more about the challenges facing Alabama’s infrastructure and solutions to raise the grades.