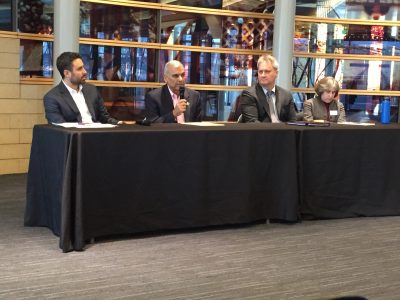 This morning, the Inland Empire, Seattle, and Tacoma-Olympia Sections of the American Society of Civil Engineers released the 2019 Report Card for Washington’s Infrastructure. Nine categories received an overall grade of a “C,” which is the same grade the state received in 2013.

Included for the first time in the Washington Report Card were stormwater and wastewater infrastructure evaluations. Stormwater earned a “D+,” the lowest grade in the 2019 Report Card, while wastewater earned a “C-.” Washington is a leader in innovative and sustainable methods for managing stormwater as its own separate entity from wastewater, but funding shortfalls and an aging infrastructure network are significant near-term challenges.

In addition to assessing each category, ASCE made a series of recommendations on how to raise the grades in the 2019 Report Card for Washington’s Infrastructure.. First, the Report Card recommends decision-makers leverage sustainable loan programs to finance necessary infrastructure projects around Washington, by including better utilization of federal revolving loan programs,  such as the Water Infrastructure Finance and Innovation Act (WIFIA) and the Transportation Infrastructure Finance and Innovation Act (TIFIA). Engineers further recommend that financing from the state’s Public Works Trust Fund be used for its intended purpose of modernizing infrastructure, rather than offset spending elsewhere in the state budget.

Additionally, ASCE recommends balancing the needs of urban and rural communities. In this Decade, Seattle is the fastest growing city, and its residents have responded to challenges such as increased congestion and worsening air quality, by voting to provide additional funding for transit and school facilities. These actions are clear indications that Puget Sound is preparing for its future. However, investment and priority should not be limited to urban areas; rural Washington communities require support for maintaining and improving water, roads, aviation networks, and more. In addition, there must be  continued focus on the implications of a larger population, including demands on water supply, wastewater, and schools,, particularly in the larger metropolitan areas.

Finally, ASCE members recommend Washington take a leading role in building environmentally sustainable and resilience infrastructure to prepare for natural disasters. This Report Card notes that Washington is home to vital natural resources, a pristine environment, and a population that treasures them. Projects such as green stormwater infrastructure to protect fish and wildlife, preparation for seismic risks, and improved mobility to fight congestion will protect Washingtonians in the years ahead. However, all these initiatives require robust, sustained investment to adequately prepare.