Tennessee, the “Volunteer State,” the “Country Music Capital of the World,” boasts the official slogan, “Tennessee – America at Its Best.” Already, Tennessee has been named “Best place to move to.” What would it take for Tennessee to be known as the “Home of America’s Best Infrastructure”?

The American Society of Civil Engineers’ (ASCE) 2016 Report Card for Tennessee’s Infrastructure grades Tennessee’s infrastructure a “C” – the same grade the state received in 2009. Considerable investments have been made across the state to improve our infrastructure. Funds from the 2009 American Recovery and Reinvestment Act initiated numerous projects. The Tennessee Department of Transportation’s (TDOT) Better Bridges Program replaced, repaired, or rehabilitated 193 state-owned structurally deficient bridges. The Tennessee Department of Environment and Conservation (TDEC) received funding to upgrade facilities at two of the state’s premier parks. However, these investments won’t stop our existing infrastructure from aging, nor stop the need for infrastructure to keep up with dramatic population growth.

We rarely consider the impact infrastructure has on our daily lives, from the water we drink and the roads we drive on, to the power we use to light our homes and the food we put on our tables. Volunteers from the Tennessee Section of ASCE developed this Report Card for Tennessee’s Infrastructure to help all Tennesseans understand the state of our infrastructure so we can work together to earn our next “Best of…” award: Tennessee – Home of America’s Best Infrastructure. 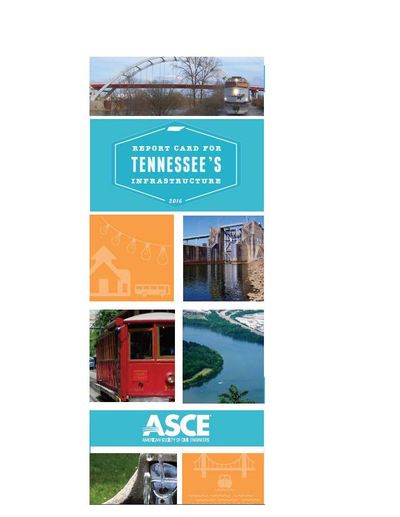 Tennessee’s Aviation Infrastructure serves both commercial and general aviation needs. The network consists of 69 Public Use Airports, including 2 medium-sized commercial hub airports, 3 primary commercial non-hub airports, 1 non-primary commercial facility, and 64 general aviation facilities. According to the most recent data available from the Federal Aviation Administration (FAA), Tennessee was host to over 8.6 million enplanements in 2014, with Nashville ranking 3rd nationally among medium-sized hubs. Tennessee’s aviation infrastructure has seen slight improvements in recent years due to implementation of a pavement management program, and recent projects that were completed, including the replacement of at least one bgeneral aviation airport (Hardwick field) with a new facility (Cleveland jetport) that increased capacity and safety. Memphis ranked #1 overall in 2014 for amount of tons landed at U.S. airports. A 2014 study of runway, taxiway, and aircraft parking apron pavements at Tennessee General Aviation airports indicates satisfactory condition. However, pavement constantly deteriorates with time and use. In 2015, the Tennessee Department of Transportation (TDOT) Aeronautics division developed a state-wide pavement management program to assess pavement conditions and analyze needs for pavement restoration and maintenance. Tennessee utilizes an aviation fuel tax as its primary funding source for aviation infrastructure. Recently, legislation was enacted to cap the amount of aviation fuel tax that can be collected from a single entity. It’s important to note that unless a new funding source is located to replace the revenue lost by the Tax Cap, the ability to meet future infrastructure needs is greatly decreased.

Tennessee has a total of 19,793 bridges on public roads with a length greater than 20 feet, excluding those owned and maintained by a federal agency. The state is home to the lowest number of bridges that are both structurally deficient and functionally obsolete of all the southeastern states. Of its bridges, 978, or 5%, are classified as structurally deficient, thanks to a concerted effort, beginning in the 1980s and continuing today, to repair or replace bridges. Since 2004, over 1,000 new bridges have been constructed in the state; hundreds have undergone major reconstruction. While funding for rehabilitation of state-owned bridges has been relatively stable, the funding available for locally-owned bridges does not keep up with the need. Without additional investments in bridges in Tennessee, bridge conditions in the state will deteriorate, leading to more bridge weight postings and closures, increased congestion, and a corresponding impact on businesses and the quality of life for those users who must endure slower and longer trips.

Similar to the nation’s dams, the average age of Tennessee’s dams is about 50 years, with about half of the regulated dams built between 1950 and 1979. Ninety-three percent of the dams in Tennessee are earth dams, 3% are concrete dams, and the remaining 4% are gravity, masonry arch, and rockfill. Of the 661 state-regulated dams in Tennessee, all but 10 are in compliance with the state’s safety standards. Of the dams that are regulated by the TN Safe Dams program, high hazard potential dams are inspected annually, significant hazard potential dams are inspected every two years, and low hazard potential dams are inspected every three years. However, 576 farm ponds in Tennessee (about 41% of the state’s dams listed in the National Inventory of Dams (NID)) are exempt, meaning they are not regulated or inspected, a major contributing factor to the Dams category grade. Funding for the state-regulated dams has typically fallen below that of the national average but has not significantly impacted the ability to inspect all dams currently under their authority.

Currently 485 public water systems in Tennessee serve 6.9 million customers, including industrial and commercial users. Approximately 90% of Tennessee’s population is served by a public water water distribution systems of 40% or greater are common due to aging infrastructure. Tennessee utilities spent millions of dollars over the last 10 years to improve service to customers. The EPA estimates Tennessee’s total 20-year drinking water infrastructure needs as $2.7 billion.

The state of Tennessee is located at the heart of the nation’s inland waterway system. The state’s three major navigable arteries, the Cumberland, Mississippi, and Tennessee Rivers and their tributaries, connect the state’s four public river ports and over 170 private river terminals to river ports in 21 states and ocean ports along the Gulf Intracoastal Waterway. Barge traffic is often delayed at Tennessee’s locks due to abundant and unscheduled repairs, which can take months to completely resolve. Delays also occur due to low water, which results in light-loading barges and increased shipment costs. While delay times are generally low, they indicate an inability to effectively meet current demands. Budget cuts and depleted funds in the federal Inland Waterways Trust Fund threaten to set back Tennessee’s water transportation infrastructure, including the new Chickamauga Lock, Tennessee’s biggest water infrastructure project.

The Tennessee State Park system contains 56 State Parks on 62,073 acres and 85 Natural Areas containing 128,548 acres. Some of the buildings and infrastructure of the park system are nearing 70 years of age. The parks are generally well maintained, although there are several instances of park facilities being closed due to lack of funding for maintenance. Since 2009, the park system has been on a very positive track. However, there is a continued shortfall in both maintenance and capital project funding.

Tennessee has over 90,000 miles of roadways and boasts superior roads when compared to neighboring and peer states. Increasing levels of traffic congestion cause significant delays in Tennessee, particularly in its large urban areas, resulting in long commute times and negative impacts on commerce. The average driver in the Chattanooga area loses 28 hours to congestion each year, while each driver in the Knoxville area loses 35 hours each year. Drivers in the Memphis area lose 43 hours annually due to congestion and drivers in Nashville lose 45 hours annually. $433 billion in goods are shipped from sites in Tennessee annually, and another $266 billion in goods are shipped to sites in Tennessee, mostly by truck. Tennessee is one of only 5 states that do not use debt as a funding source for its highway system, instead using pay-as-you-go strategies exclusively. However, currently the funding is not keeping up with demand or deteriorating performance, as an estimated $475 million is needed annually to keep up the current state of good repair on state-maintained roadways, and this number grows with inflation every year.

Tennessee’s public school system needs to add new schools or additions, and needs to renovate existing facilities to meet current and future attendance needs and foster positive education environments. While the statewide growth rate is relatively low, fast-growing cities and counties contribute greatly to the overall need for new schools, additions, and renovations or maintenance. 82 of the state’s 1,746 elementary and secondary schools, about 5%, were in fair or poor condition. The state reported a total need for education infrastructure improvements across K-12 and post-secondary classifications of about $8.5 billion for the period from July 2013 to June 2018, including about $1.72 billion just for new K-12 schools or additions to address capacity needs. A significant amount of the funding needed for new schools and renovations is currently not funded at all, and is likely to remain that way.

Tennessee has 26 transit systems statewide that can be classified as Urban (4), Small Urban (12), and Rural (10). Although some positive programs for transit are occurring at the state level, there are many areas where the momentum has been stifled. Each of the systems has replaced transit vehicles as needed or has performed modifications that reflect the needs of the community it serves. However, overall accessibility to transit in Tennessee is limited. In general, about 40% of the cost to operate transit comes from fare-box returns and advertising sales, leaving about 60% to be covered by some other local, state, or federal revenue sources. Between 2013 and 2014 transit funding increased by 24.5% in total.

Like most states, Tennessee suffers from aging wastewater infrastructure. Tennessee has 242 municipal sewage treatment and collection systems regulated by National Pollutant Discharge Elimination System (NPDES) permits, and they serve about two-thirds of the state’s population. About 45% of the annual sewage flow treated in wastewater facilities originates from groundwater or rainwater leaking through deteriorated sewage pipes, joints, or manholes. Reports submitted by 55 systems show that they experienced peak-day flows that exceeded facility capacity more than 60 days in a year. Combining the estimate of $1.1 billion (to cut Infiltration/ Inflow leakage in half) with additional data in the US-EPA Clean Water Needs Survey (CWNS) shows an overall need of $2.6 billion for Tennessee.

76% of the state regulated dams have an Emergency Action Plan

$1.5 billion of unmet needs for its parks system

2,552 miles of freight railroads across the state, ranking 25th nationally

$1.73 billion in wastewater infrastructure needs over the next 20 years

Across the country, many states are proving that funding and modernizing infrastructure is a key priority. We just saw Illinois pass a massive, bipartisan transportation...

On Thursday, December 6, the National Academies of Sciences, Engineering, and Medicine, Committee for a Study of the Future Interstate Highway System, and the Transportation...

Vote for Infrastructure on November 6th!

Infrastructure investment is a popular topic this election season, making its way onto the ballot in several states around the country including California, Connecticut, and...