North Dakota’s infrastructure is the backbone of our state’s economy. Infrastructure provides our most important asset – our people – with the ability to effectively push our state and nation forward into the future. The condition of our state’s infrastructure impacts our ability to be competitive in the national and international markets and provides the quality of life that all North Dakotans expect to have and be proud of. North Dakota, known for the unwavering work ethic of its people, can position its next generation of people by implementing changes in funding, asset management and innovative solutions for maintaining, improving and expanding the state’s infrastructure.

This Report Card is the first of its kind for the state of North Dakota, providing a snapshot for eight categories of infrastructure:  Bridges, Dams, Drinking Water, Energy, Levees, Roads, Transit, and Wastewater. Our state’s infrastructure received an overall GPA of C, which is slightly better than the national GPA of D+. A GPA letter grade of C means the infrastructure in our state is in mediocre condition. Our networks show general signs of deterioration and require attention, and some elements exhibit significant deficiencies in conditions and functionality, with increasing vulnerability to risk.

As civil engineers, our responsibility is to protect the public health, safety, and welfare of those who use our state’s infrastructure. We hope the public and policymakers find this Report Card insightful so the important and difficult conversations can happen and action can take place. 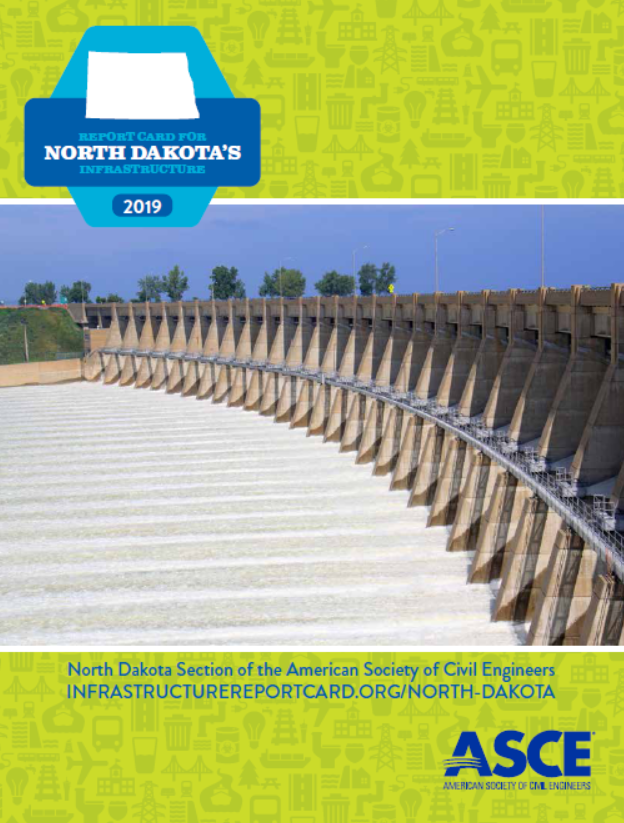 North Dakota has approximately 3,153 intact dams, with a wide range of purposes from flood control to recreation. According to the National Inventory of Dams (NID), there are 49 high hazard potential (HHP) dams in the state (including federal and state-regulated dams). A HHP dam is a dam in which failure is expected to result in loss of life. Seventy-three percent of the HHP dams in the NID have a condition assessment rating and half of those are considered deficient and do not meet accepted safety standards in some way. The condition of these dams is concerning; however, inspections are occurring regularly. Eighty-eight percent of HHP dams have emergency action plans (EAPs), which is higher than the national average of 77%. This is a positive but does not offset the overall concern with the condition of the HHP dams. The State Water Commission has cost-share policies in place to assist owners in developing EAPs; however, commodity prices and legislatively directed funding priorities greatly influence available funding.

Public water systems provide potable drinking water to 98.8% of North Dakota’s residents. Most of the state’s public water systems are small, serving 3,300 residents or less. Major new drinking water infrastructure projects, such as the Williston Regional Water Treatment Plant expansion and the Western Area Water Supply Project, were completed in response to the oil boom’s population growth. However, other portions of the distribution system are at the end of their service lives and require either rehabilitation or replacement. The North Dakota Drinking Water State Revolving Fund (DWSRF) Intended Use Plan indicated that in 2018, there were approximately $594 million worth of DWSRF-eligible infrastructure projects state-wide. Fortunately, investments are being made. Approximately $125 million will be available from the 2017-2019 biennium for water projects from the State Water Commission, while the DWSRF is funding approximately $46 million in projects. Despite challenges associated with an aging system, the state has an excellent public health record.

North Dakota’s 65,000 miles of transmission and distribution lines transmit about twice the amount of electricity the state uses on average. Most of the electricity is generated by coal, but recently wind has made a considerable addition to the market, up to 1/4 of the total generation. This has impacted the way the coal industry needs to look at daily demands and long-term planning. Meanwhile, hundreds of miles of transmission line were planned during the early 2000s oil boom, but portions of projects were canceled when oil prices declined. Rates are capped at investor owned utilities and increasing fees to pay for transmission line land acquisition, permitting and routing has proven difficult. North Dakota’s electric rates are relatively low, averaging $0.12 per kwh.

The North Dakota State Water Commission has issued permits for 627 flood control levees, totaling 325 miles. Heavy flooding across North Dakota in 2009, 2010 and 2011 exposed deficiencies in the levee systems, and major investments are now underway to improve the condition and capacity of levees to reduce flood damage in the future. Over $1 billion has been spent, from all funding sources, on flood related projects along the Red River alone since 1997. Residents in Fargo, Grafton, Valley City and Minot approved sales tax increases to pay for the local share of various flood mitigation project costs.

The state and local governments have done a commendable job of prioritizing investment in levees in recent years and great strides have been made. The United States Army Corps of Engineers periodically inspects 94.19 miles of North Dakota levees, 21.54 miles of which are presently rated as unacceptable, but these bad marks are sometimes the result of incomplete paperwork rather than reflective of the actual condition of the structures. North Dakota does not require periodic levee inspections nor reports on levee conditions after their construction.

North Dakota ranks among the highest-spending states per capita on highways. Currently, 67% of urban roads and 77% of county and township roads are in good or very good condition. However, looking ahead, significant work will need to be done to address roadside safety, find alternative sources of funding, and ensure equitable assignment of resources among high-growth areas. Should funding remain stagnate, estimates show that state-maintained roads in poor condition will nearly double between 2018 and 2021, from 443 miles to 872 miles. And while capacity remains adequate across the state, despite a 64% increase in vehicle miles traveled over the last 20 years, the state has major challenges during winter months responding quickly to snow removal and de-icing.

Public transportation plays a major role in improving livability for transit-dependent populations in the state of North Dakota. Three of the 29 transit agencies in the state are classified as urban transit providers, four are tribal transit providers, and the remaining 22 are rural operators. Three modes of public transportation are available in North Dakota: Fixed-Route Bus, Demand Response Transit, and Demand Response Taxi. Public transit ridership in North Dakota dropped 6.5% from 2015 to 2016 and 4.9% from 2014 to 2015, mirroring a national trend of decreased ridership. The farebox recovery rate (percent of trip’s operating costs recovered through passenger fares) for all transit operations across the state is observed as 8.4%, which is close to the national average (9%) for rural transit agencies. Meanwhile, with operating expenses totaling over $34 million, increased funding is needed to improve accessibility and public transportation services and facilities.

North Dakota’s 755,000 residents are served by over 350 municipal wastewater systems. Rapid population growth associated with the oil industry resulted in many recently completed or ongoing upgrades and expansions of municipal wastewater treatment facilities (WWTFs). Over the last 10 years, more than $265 million was spent to improve and upgrade the mechanical WWTFs in the larger communities. Approximately $180 million is expected to be invested in the WWTFs of Fargo, Grand Forks, Bismarck, and Minot over the next 10 years. However, per capita spending on wastewater operations and maintenance has remained flat and older communities struggle with stormwater infiltration and inflow issues as the collection systems age. Additionally, communities served by wastewater pond treatment systems are challenged by storage volume needs, dike erosion protection, seasonal odors, and delayed discharges due to pollutant variability.

89% of the state regulated dams have an Emergency Action Plan

$100 million of unmet needs for its parks system

3,287 miles of freight railroads across the state, ranking 13th nationally

$219 million in wastewater infrastructure needs over the next 20 years