Why an Infrastructure Report Card?

What Every New York Citizen Should Know 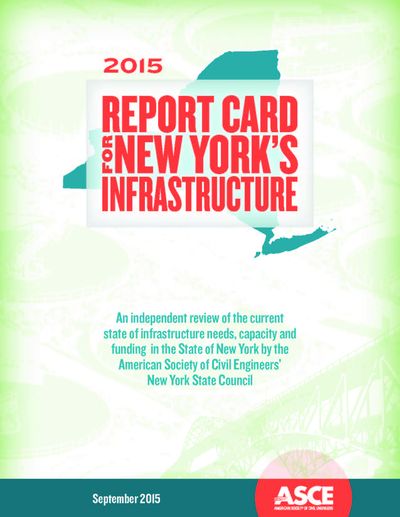 New York State’s aviation system includes 18 large commercial airports, like LaGuardia and Buffalo, as well as 67 smaller public airports. Airport passenger traffic is projected to increase to 150 million passengers by 2030, and airports across the state will exceed capacity— JFK (130%), Westchester (112%), Buffalo (106%), and LaGuardia (103%). The three New York City region airports already are a major contributor to airplane delays across the country and will require 188 projects worth $4.7 billion over the next decade. 75% of these will be for state of good repair work. Federal, state and local funding of airport capital investments amounts to less than 2% of the $50 billion each year in economic gains created by New York’s airports. 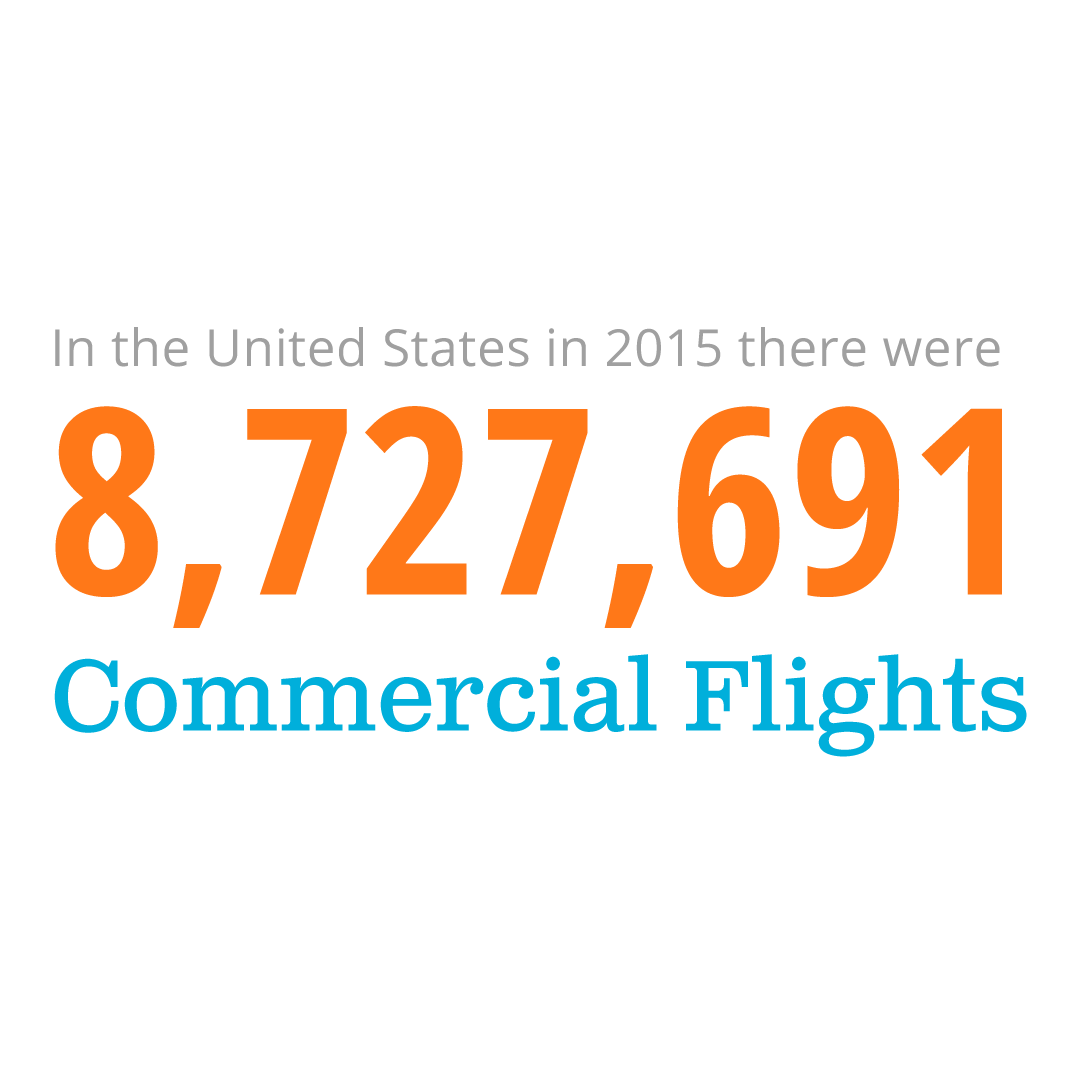 New York has 17,456 bridges—essentially one bridge for every seven miles of roadways in the state, and enough bridges to stretch from Albany to Miami. More than 50% of New York’s bridges are 75 years old, and over 400 of New York’s bridges are 100 years old. New York also has 2,012 structurally deficient bridges that require consistent maintenance or improvements to safely operate for freight and commuters. Overall, New York’s local bridges are often in worse condition than the State bridges. For example, recently only 385 state and local bridges were scheduled for repair over two years, which is less than 10% of the bridges that were in need of repair. Approximately 100 bridges in New York State are currently closed because of serious deficiencies.

New York state has over 7,000 dams that provide for drinking water, irrigation, flood control, fire protection, recreation, and hydropower. The average age of New York’s dams is 69 years, and 400 of those structures are classified as High Hazard dam structures. Of the state’s high hazard dams, 392 now have Emergency Action Plans in place for public safety. Since New York State’s Dam Safety Regulations were updated in 2009, work on 58 dams commenced improving safety. However, challenges remain as $152 million is needed to repair the deficient High Hazard and Intermediate Hazard dams in New York.

In New York State, 10,147 regulated water systems provide clean water to 20 million of New York’s citizens. Nearly 95% of New York’s population receives water from the state’s public water supply systems. Unfortunately, 95% of the submitted improvement projects to the Drinking Water State Revolving Fund program remain unfunded due to the overwhelming demand. The latest estimate of repairing, replacing, and updating New York State’s drinking water infrastructure is $38.7 billion over 20 years. With almost half of New York City’s pipes put in place prior to 1941, it would take 100 years or more to upgrade its aging pipes at current replacement rates. From frequent pipe breaks to large system upgrades to rebuilding from storm damages, New York State’s aging drinking water network has no shortage of challenges.

New York is home to the first state park in the nation, Niagara Falls State Park, and the largest public park in the U.S., Adirondack Park, along with 179 other state parks, 35 state historical sites, and nearly 335,000 acres of land. Hosting 62 million people each year, New York ranks first in the nation for operating facilities and campsites. However, New York’s park system has seen hard times. Reaching a crisis in 2010, almost half of the parks were almost closed due to a $1 billion backlog of projects, almost half because of immediate health and safety needs. New York changed course in 2011, and committed to catch up on infrastructure decay with 279 capital improvement projects at 109 parks and historic sites. By 2020, New York’s park system should see a $900 million investment in state parks using both private philanthropy and public dollars as well as innovative best practices.

New York State’s 240,000 mile road network is critical to the State’s economy and everyone’s quality of life. However, one-third of New York’s major highways are considered to be in poor or fair condition, even as miles driven by New York’s citizens are on the rise, creating crippling congestion and climbing operating costs. In fact, New York City-area drivers, accounting for half the state’s population, each waste 53 hours per year just sitting in traffic. The combination of rough roads and congestion costs motorists a total of $6.3 billion statewide—that’s $694 per driver in NYC, $504 for Albany, and $477 for Syracuse. Poor roads also cost rural areas where fatalities are three times more likely than on other roads in New York. Both the typical state funding programs and special initiatives, like New York Works, are being used to combat the backlog. By 2030, New York needs to spend about $40 billion on roads to keep up with road conditions.

Solid waste includes any discarded or abandoned materials that must be safely disposed of like household trash, commercial waste, and recycling. New Yorkers generated 5.15 pounds of trash per person per day, which is 12% higher than the national average. However, New York’s overall waste sent to landfills has been reduced by half over the last 20 years—from 14.6 million tons in 1990 to 7.7 million tons in 2012. Also, the number of landfills has been significantly reduced from 348 in the 80s to only 59 today with the closures of small, local municipal landfills that violated federal and state regulations, but even with a decrease in the number of landfills and combustors, the state has an estimated remaining capacity of 21 to 25 years. New York State has stepped up on managing waste through reduction, reuse and recycling, including composting of organic waste and changing electronic waste practices, but shifting the focus from disposing of waste to decreasing waste will keep up the progress made.

Transit systems across New York are being forced to stretch beyond capacity—more riders, aging vehicles, capital funding gaps, and structures built over 100 years ago that must be more resilient today than ever before. New York’s Metropolitan Transportation Authority extensive subway and bus system serving over 7 million riders daily, and the state’s transit network outside of New York City includes over 100 transit systems across New York State providing over 550,000 people with essential service in urban, suburban and rural areas. Upstate and suburban transit systems require $1 billion over the next five years to maintain infrastructure in a state of good repair and add capacity to address ridership demand. However, the anticipated funding will only cover 43% of transit infrastructure needs, leaving a $577 million funding gap. New York City’s transit system needs $68 billion in the next twenty years along with new technologies to replace aging system components and improve the quality of transit service. While transit systems continue to find innovative solutions to improve efficiency and attract riders, these innovations will not replace the need for future infrastructure funding.

97% of the state regulated dams have an Emergency Action Plan

$22.76 billion in drinking water infrastructure needs over the next 20 years

$239.4 million of unmet needs for its parks system

3,279 miles of freight railroads across the state, ranking 14th nationally

$31.4 billion in wastewater infrastructure needs over the next 20 years