Alaskans think about infrastructure a little bit differently than the rest of the United States. Alaska’s infrastructure is truly unique, covering a vast area of over 663,000 square miles and supporting a population of just over 730,000. For transportation systems, there is no one mode of transport in Alaska, and sometimes the route is different depending on the time of year. Some homes do not have access to indoor plumbing, and while sometimes that’s by choice, too often it’s not. Many of Alaska’s remote communities are still in need of water and wastewater systems that are safe, efficient, and sustainable, while even our most populated areas are still learning how best to handle every day solid waste in a subarctic environment. Alaska’s infrastructure investment is crucial to our way of life and the success of the economy. With declining oil prices and federal funding sources that cannot keep up with the demand for projects and operations and maintenance needs of current systems, the American Society of Civil Engineers (ASCE) Alaska Section wants to ensure Alaska’s leaders have the best information available about the current conditions of Alaska’s infrastructure. As Alaska legislators address budget challenges, the Alaska Report Card – developed for Alaska, by Alaskans – demonstrates the importance of infrastructure investment. There are solutions to Alaska’s poor infrastructure grades! Together with the information provided in the Report Card for Alaska’s Infrastructure, it is ASCE Alaska Section’s hope that Alaska’s Civil Engineers can work together with state leaders to plan, design, build, operate and maintain safe, efficient and sustainable infrastructure for all Alaskans. 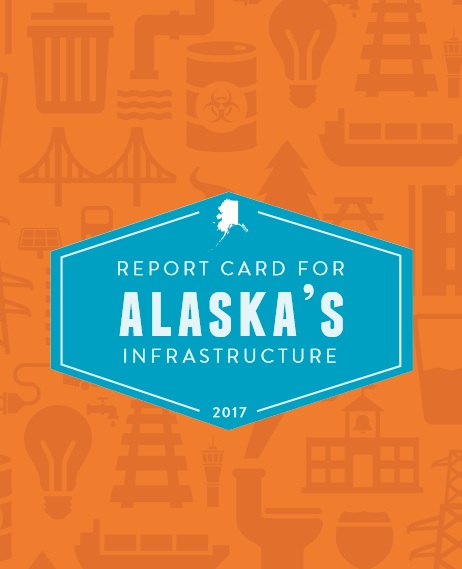 Aviation i n  Alaska is a huge economic engine, contributing approximately $3.5B annually to the state’s economy. The people of Alaska are eight times more likely to use aviation as transportation than people in the rest of the country. With more than eight in 10 of the state’s communities only accessible by air or water, much of the state is dependent on aviation for access to fresh foods, mail, and healthcare. Alaska Department of Transportation and Public Facilities owns and operates 240 of the 400 public use airports in Alaska. Ted Stevens Anchorage International Airport (ANC), Alaska’s largest airport, serves approximately 5.4 million passengers annually. ANC is also a cargo airport second only to Memphis in the U.S and among the top five globally. In 2008, the Alaska Aviation  System Plan estimated a total of about $100M  in deferred maintenance.

Alaska has about 1,400 bridges, the majority of which are less than 50 years old, making them younger than bridges in most other states. Of the 972 permanent bridges graded, 82 (8.4%) are structurally deficient, requiring repair and more frequent inspection and maintenance. While less than 10% of Alaska’s state and local bridges are rated as being in poor condition, the critical and economical time to maintain this key infrastructure is before problems arise. The current rate that Alaska’s bridges are improved could be accelerated, though a number of bridges have improvement projects in planning or underway. A strategic funding approach to maintain bridges before problems arise and replace bridges that are functionally or structurally inadequate is needed.

There are currently 178 dams in Alaska, including 20 hydroelectric dams regulated by the Federal Energy Regulatory Commission (FERC) and 28 with high hazard potential. The Alaska Dam Safety Program is managed as a cooperative effort between the Alaska Department of Natural Resources and stakeholders in design, construction, and operation of dams in Alaska. Regulations require emergency action plans for high and significant hazard potential dams, and periodic safety inspections for all dams under federal or state jurisdiction, with the state employing two full time engineers to ensure the safety of these dams. Currently, 25 of Alaska’s 28 high hazard potential dams have emergency action plans, and 18 of the high hazard potential dams are in good or fair condition. At least 9 dams have been removed in the last two decades, and planning is in progress to remove the Lower Eklutna Dam.

Alaska’s water and wastewater systems can be generally divided into two categories: municipal and rural. Most municipal systems that serve more densely populated areas are stable and have good management and funding to operate and maintain those systems. However, many homes in these communities still rely on individual well and septic systems due to the high cost of expanding existing systems. The state has over 280 rural communities, 31 of which have no centralized water or wastewater system and must rely on hauling water from rivers, lakes and ice to meet their needs and on outhouses for wastewater disposal. For those rural communities that have water and wastewater systems, their systems are degrading due to the high cost of energy, lack of population to support higher than average maintenance costs, and a shortage of experienced operators to maintain the systems. Alaska has a total estimated funding need of $1.5 billion for water and wastewater systems based on current conditions.

Alaska’s power generation systems are generally in excellent condition in the larger, urbanized and highway-accessible areas of the state; transmission systems, however, have not kept pace, and portions of the system do not provide sufficient capacity for efficient and economic power delivery.  Moreover, there are significant gaps in the connectivity of power systems on several major highways.  In the remote areas that are not accessible on the main highway system, many energy facilities (including generation units and bulk fuel tank farms) are in fair to poor condition, with operations and maintenance being  a key challenge.

The Alaska Marine Highway System (AMHS) supports commerce throughout the state, providing 1,700 jobs and an estimated $273 million in direct and indirect spending. Alaska has 6,640 miles of coastline, and the AMHS serves 33 communities using 11 ferries. In 2015, AMHS served 288,133 passengers and 100,547 vehicles, two-thirds of which were Alaska residents. Fewer ferries and more downtime on the system would result in increased cost of goods, significantly increasing the cost of living in coastal communities. For every dollar of General Fund money budgeted to AMHS, there is $2.30 more economic activity in Alaska.

There are 125 small boat harbors in Alaska serving diverse maritime users, including commercial fisherman, recreational boaters, freight and fuel tug operators, tourism-related charters and Alaskan Native subsistent hunters and fishers. The conditions of the small boat harbors vary significantly based on the economic viability of the municipality, with numerous facilities unable to maintain and repair aging infrastructure due to the lack of local funding. Waning state revenues is an impediment to providing grant funding and capital investment to both municipal-and state-owned harbors. The Port of Anchorage, which receives 85% of all consumer goods entering the state, is unable to adequately fund a needed modernization project. The lack of a deep-water Arctic port is a barrier to providing the infrastructure necessary to develop Alaska resources and to carry out national strategic goals in the region.

The Alaska Department of Transportation & Public Facilities maintains 5,609 centerline miles of roadways, 3,737 miles of which are paved. Along with state-maintained roads there are roadways maintained by boroughs, cities, villages, and native corporations spread across communities around the state. The pavement conditions of state roadways are “fair” and the state is experiencing a budget deficit, which has led to budget cuts for the highway program. Without an increase in the capital budget, Alaska will not have sufficient funding to preserve existing roadways and for future development, a particular challenge as roads must withstand Alaska’s variable climate.

Alaska’s size, extreme weather, small population, and high costs make solid waste management a unique and challenging problem. There are nine Class I Landfills in Alaska serving around 600,000 people – over 80% of Alaska’s population. The typical Class I landfill has a remaining life of 20 to 60 years. While Alaska’s Class I landfills have sufficient capacity and safety standings and meet public health needs, an increase in funding would allow for increased recycling, innovation, and sustainable practices that would raise the grade. Alaska is the only state that still operates Class III landfills, all of which are located in small rural communities. Collecting waste from Alaska’s outermost communities has to be done either by air, sea, or left in the community. While Class II and III landfills is likely worse than the Class I landfills evaluated.

89% of the state regulated dams have an Emergency Action Plan

$49.59 million of unmet needs for its parks system

506 miles of freight railroads across the state, ranking 46th nationally

$199 million in wastewater infrastructure needs over the next 20 years